So i sort of hibernate during the winter so i haven't done much fishing. I did have a few trips before christmas. Most notable was a Pike session in November on the Tees which resulted in two double figure fish. the 1st was 10lb 15oz 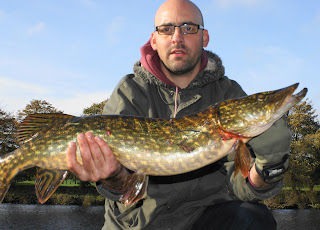 The 2nd was slightly bigger at 11lb 5oz 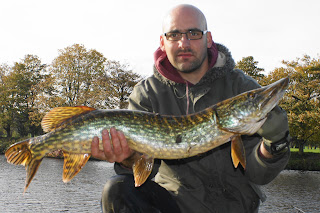 Both caught on popped up deadbaits. I also lost another two.
Previous to that i'd taken my son to Renny and he managed to catch his first Carp, chuffed to bits he was.
In to this year and i had my first session April at The Bricky in Stockton. Fished the Waggler for Tench but ended up with one of those famous Bricky blanks! Since i've had two sessions at Carrs which have resulted in mixed bags of Carp, skimmers, Roach and my 1st ever Crucians. The biggest was this one of about 10oz 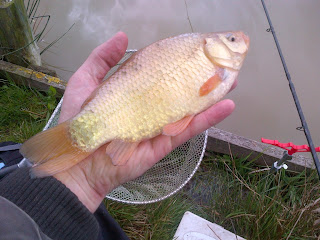 Right up to date with my most recent trip to Thorpe Underwood for a 24 hour Carp session with my son. I had 3 runs during the night. The first was a Bream of around 3lb. The 2nd was a Carp that pulled the hook and the 3rd was a big Carp that i played for 10 minutes at 4 o clock in the morning only for the hook to pull! Anyway i decided to stay up and do a bit of pole fishing which resulted in 10 Bream, 3 small Carp and a tough little Tench that fought like fury! 3lb 10oz 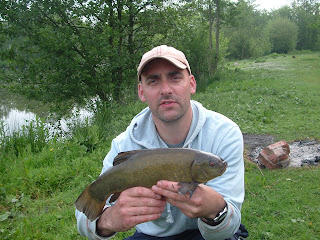 I'm going to try and concentrate on big fish this year. I have two shiny new Carp rods and a new 2 man bivvy so hopefully between work and family commitments i'll squeeze a few overnight sessions in! Carp are my main target but i know i won't be able to leave those Pike alone!
Posted by TheObsessiveAngler at 15:20 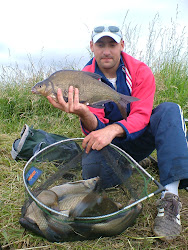 Me with a typical net of Tees Bream. 7 Bream for about 20lb. 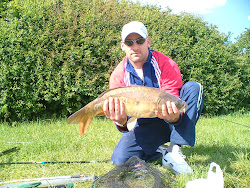 Me with a 9lb Mirror Carp caught at Renny Lake.